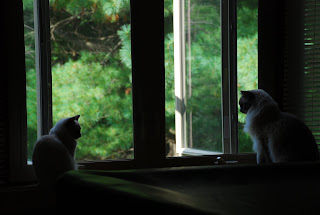 Hey, can't we just be friends? 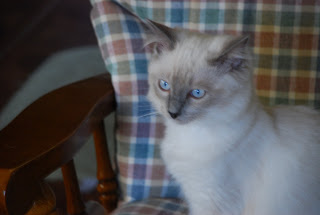 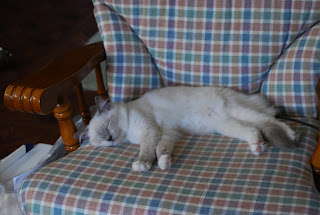 Let me introduce my new ragbaby, Frankie. He's 4 months old and he's a little snuggler. I think he's wonderful but the girls do not share my opinion at all. They have hissed and growled and hissed some more. They were growling and hissing at each other which I thought rather strange. Frankie is not intimidated in the least by them....he just wants to play. The good thing is after only two days, Maggie and Cally have made up and they are sorta warming up to the little guy. Maggie more than Cally which was a very big surprise to me. I thought Cally would be just fine with him....NOT!!!! All in all, it's going much better than I expected. I'm hoping by the end of the weekend Frankie will have won them over. He already has us wrapped around his cute little itty bitty paws.

We had a wonderful time up north....the weather was just perfect! Thanks for stopping by....I hope you have a wonderful weekend!

I can't believe how fast the days just fly by. I did finish a pumpkin applique block. I was megged into buying this BOM last year from Vicky. She kept tempting me with her finished blocks. I really enjoyed making this one. It's needleturned and I'm pleased with how it came out. I'm especially glad to finally be working on the project. I hope you're feeling better Vicky. She has pneumonia so you might want to check up on her. I hope you're taking it easy and resting alot! 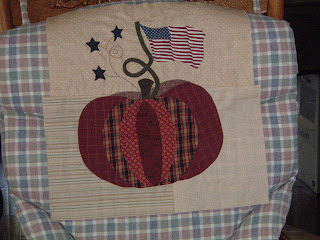 We are leaving this morning to go up north to Pittsburgh, NH....it's so peaceful up there and we love it. I have a bag filled with handwork, some magazines and a couple of books to read. We'll be home Monday. My niece will be staying with the girls while we are away. She considers it her vacation....she's a sweetie and we couldn't go without her. :) 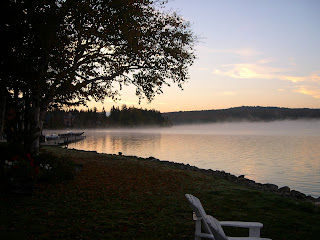 I hope you have a wonderful weekend.

Cheryl over at Polka Dots and Rick Rack is celebrating her one year Blogaversary. Congratulations to Cheryl who is also a brand new Grandma to baby Luke! She's having an awesome give away so run on over and congratulate her.