Here it is another week has flown by, oh my. I've been stitching my cats and figuring out my method for doing the pumpkin swap....what was I thinking? I wasn't....I had a temporary lapse in brain function. I have not had very good luck in the past with swaps. I do hope this one will be different. I like how my little pumpkin came out....2 down, 34 more to go. 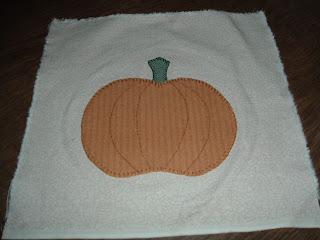 Tomorrow my good friend, Cindy is coming for a sewing day. She's been drooling over this witch wallhanging so I got the stuff for us to do it. I hope it will be a nice surprise for her. 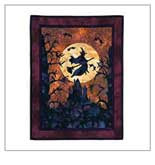 I really want to make a quilt with my scaredy cat fabrics. I was thinking of using this pattern or maybe this one.......what do you think? I love seeing everyone's seasonal decorations and I want some too. :) 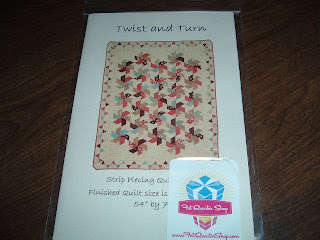 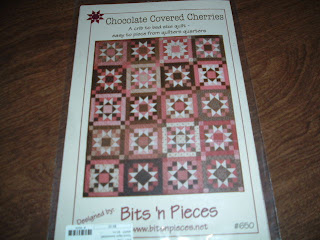 Look what Teresa sent me....isn't she the sweetest! I just love those little kitties too! They have such attitude....lol. You shouldn't have T but I'm glad you did! 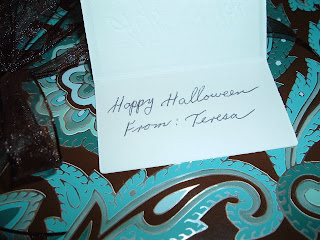 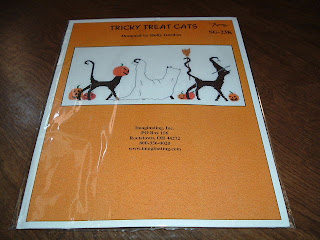 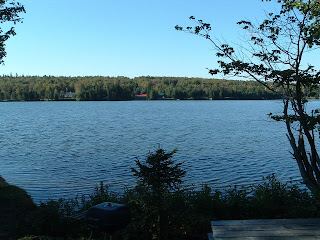 We had a wonderful time but it's great to be home. I missed my little furballs and all by blogging buddies. The weather was a little cool and it rained on saturday but it didn't matter.... it's so tranquil up there. It was so quiet the first night I had trouble falling asleep. You couldn't even hear a cricket chirp or anything. I did feed the ducks....one of them was even brave enough to eat right out of my hand. I'm not sure who was more timid. 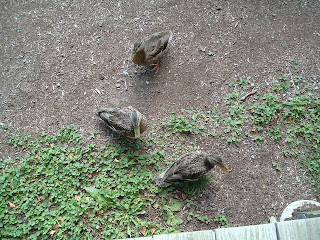 I'll have to catch up with all my blog reading.....I hope you all had a nice weekend too!

I'm leaving in the morning....no, I'm not leaving on a jet plane. We're driving up to Pittsburgh, NH. It's a 4 hour drive. It's so pretty and peaceful up there. Not much going on except for the moose which my bil will be desparately trying to find. I will be without internet until Sunday. I'll be thinking of you while I'm feeding the ducks. I hope that you will all behave....I'm not naming any names but I think you know to whom I'm referring. Sorry Darlene, but you will have to keep her inline by yourself. Did I tell you that I'm going to miss you all......well I am! 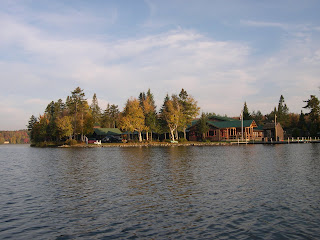 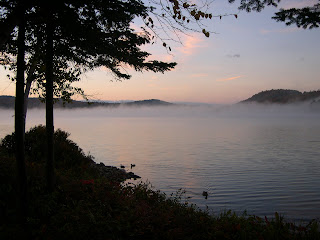 The mailman brought me the wonderful prize I won from Linda. It's more wonderful in person. Maggie thought it was pretty wonderful too! 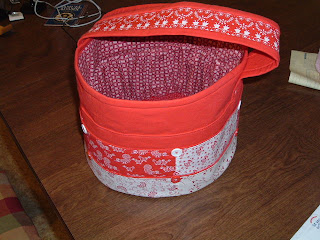 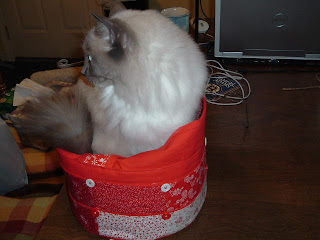 So......I woke up at 3 this morning with a full bladder. While I'm emptying it, I can hear the cats playing with something that sounded rather unfamiliar to me. I didn't really give it a second thought because well I was really still half asleep.
My hubby called me this morning from work to ask how "his girls" were? The cats....he wanted to know how the cats were. I guess when he went into the bathroom there was a mouse trap with a mouse included. I'm sorry for all you animal lovers but.....if they are coming into my house they are fair game. And SNAP is the only way to be sure they are gone. Did I tell you that I just hate mice. Seems the sound I heard was the jingling of the trap. My kitties are so proud when they catch that trap....lol Sure makes me feel secure knowing they are on the job because you know.....I just hate........yep, you guessed it.....MICE!

Then I couldn't access my hotmail account. I have Norton 360 and apparently they decided that hotmail's security certificate was revoked. So I got online with the support team. First it was Arurag and before he could fix my issues we were disconnected. Next came Anwar....it was a very short conversation as we were also disconnected. But then came my friend Sunil...I call him my friend because we were online together for the better part of an hour. Although he didn't fix my hotmail issue, he did fix my live update issue. So we were very happy. We disconnected on our own, I ran my live update and rebooted my computer. I was gonna get to my hotmail....wrong. But Shivaprosad....don't ask me to pronouce that one.....came to my rescue. He did fix my hotmail issues and I'm happy to say I can read my mail. I'm still having an issue with my messinger but I can't bear to meet another new friend today whose name I won't be able to pronounce. All of this, by the way, only took about 4 hours to complete. 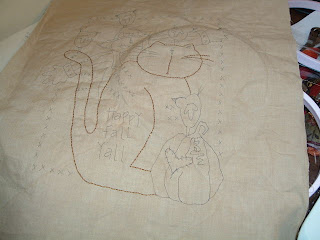 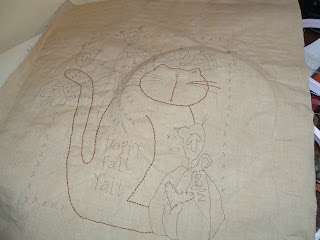 The day was not a total loss.....I am having a ball with my cat stitchery. Of course I did a whole bunch of it with stem stitching when it was supposed to back stitching. A little frogging and we're back in business and I'm loving it.


If you haven't seen Kim's Hometown block yet go check it out....it's wonderful and she is so creative. Who needs Lynette Jensen when we have Kim! Ohhhhh....did I just say that....lol

Ok....I'm not sure what's going on with the pictures. You can't click to enlarge them....anyone know what I did wrong? Aaarrrrgggg I better get off the puter before I have more troubles and have to call up some more friends whose names...well you know.....
Posted by Yvonne at 11:41 AM 10 comments:

goodies in the mail 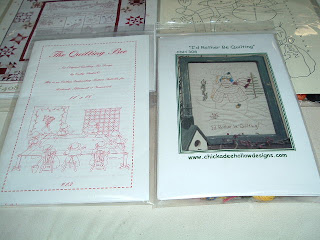 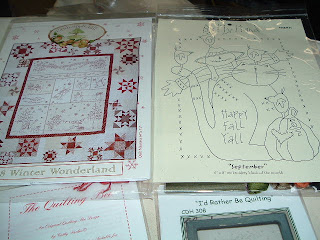 These are a few stitcheries that I got in the mail today. The cat is part of a 12 month series. I've been drooling over all the wonderful projects out there. Darlene has one to put a smile on your face for sure and Hanne has a cute one made from her Dad's drawings. I'm going to prep something tonight. I'm excited to get one started.

The week has flown by again....not much in the sewing department but that's ok....tomorrow is a new day.
Posted by Yvonne at 4:07 PM 10 comments:

I don't have much progress to report so I'm sharing one of my hawaiian applique projects. I just have to finish the backs of the turtles. I love doing this kind of applique. I wonder if I could do it justice by machine quilting it. 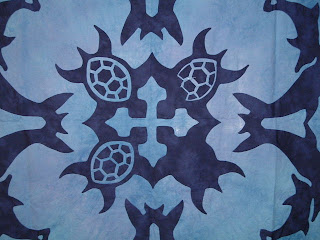 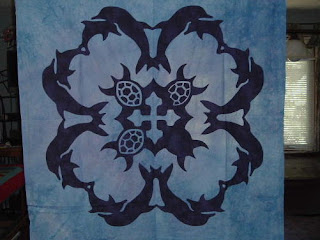 I have the pattern and fabrics for a bedsize quilt but I promised myself I would finish this one first. I'm a little intimidated to cut into this fabric.... 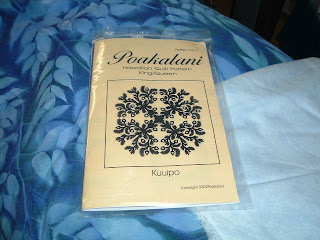 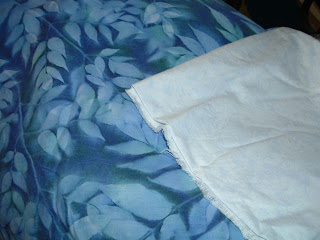 I'm thinking I might take a class with Nancy Chong in November at the Quilters Gathering in Nashua, NH. I guess I should look into that before the class is full.